Coming Home from the Streets

For Layla, being abused as a child destroyed her self-worth and she turned to drugs to numb the pain. Gracie’s early life set her on a destructive path. Feeling lost when her father died, Mindy sought a world she thought was glamorous but that proved to be her downfall.

Trapped by childhood demons, drug addiction and traffickers, an estimated one million Americans are prostituting. Coming Home from the Streets enters a dark world where bodies are sold and captures the story of women who struggled to reclaim themselves and are free.

“I have seen innumerable films on the topic of human trafficking and prostitution, but this rises above the rest as it so richly touches the heart and soul of the women. The women and their stories shine through.”
— Mary Carol Melton, Program Director, Off the Streets

The National Underground Railroad Freedom Center, The Zonta Club of Cincinnati, Cincinnati Union Bethel and Christ Church Cathedral present the premiere of the film Coming Home From the Streets on Thursday, December 3 at 6:30 pm at The Freedom Center, 50 Freedom Way, Cincinnati, 45202 (open in Google Maps).

Coming Home from the Streets DVD 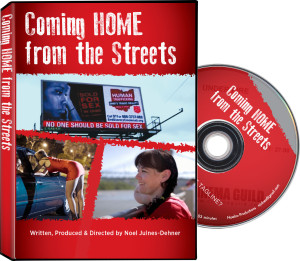